Saturday Sidebar: When are children old enough to bathe themselves? 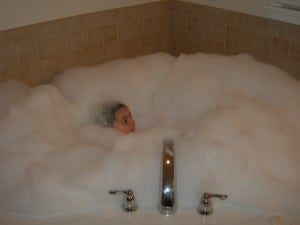 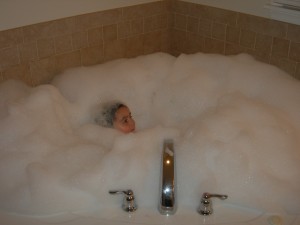 “At what age did you let your child(ren) bathe/shower themselves?”

Tina Rodriguez of Philippines writes:
“My kids are still five and three, but we’re trying to get our five-year-old-going-on-six to learn to bathe himself in preparation for the future! :)”

Lady E of Indonesia writes:
“My little 5 year old has been bathing himself (with Mama in the bathroom) since he was 3. He is fiercely independent, and though this means he sometimes has a dirty neck, I let him take charge of the soap and cloth!”

Karyn Van Der Zwet of New Zealand writes:
“Unless there is actual dirt, our kids have bathed themselves from the time they could sit in a bath.”

Jennifer Burden of New Jersey, USA writes:
“I rarely used soap with the kids when they were really little. But, when my 16 month old is really messy, I help her with using soap and rinsing it. My five-year old can shower and shampoo by herself, but she needs me to turn the water on and off!”

Meredith of Nigeria writes:
“It’s interesting that this question came up because I have been thinking about it. My son will be seven in August and I do turn water on and off and help him rinse his hair because he always leaves shampoo in it. He would probably let me still spoon feed him if I was willing. I usually have to push him to do things on his own. But my four year old can wash and shampoo by herself. I just turn the water on and off for her. She has always been very independent. I think it depends on your child’s readiness to be able to bathe “on their own” ;)”

Maman Aya of New York, USA writes:
“My son is 5 and the only thing he is pseudo-independent with is taking a shower. Although, he occasionally asks me to :). My daughter is 2 and is fiercely independent. She usually takes the sponge out of my hand to wash herself, and gets very upset at me for trying to comb the conditioner through her hair, since she wants to do it all by herself :)”

Mamma Simona of South Africa writes:
“Truth is … I can’t remember! I guess I let them get on with it from the time I felt relatively confident that they wouldn’t drown or flood the house …. but with the door open so I could still “check”! :P”

RoxIsBrilliant of Nevada, USA writes:
“My 5yo bathes himself and has done everything himself just these past few months. He does it in my bathroom so I can read in my room (or fold laundry, or whatever needs to be done) and still listen to him. I fill the tub, and often do a last rinse of his hair to catch any shampoo he missed.”

Tatterscoops of Indonesia writes:
“We don’t have a tub at my parents’ house, but my 5yo son enjoys standing under the shower head and scrubbing himself.  Now the hardest part is making him go into the bathroom first ;)”

What about you…at what age did you let your child(ren) bathe or shower alone?

Photo credit to Eva Fannon.  In this picture, her daughter demonstrates what happens when you pour “a little” shampoo into the water as it runs out of the faucet.