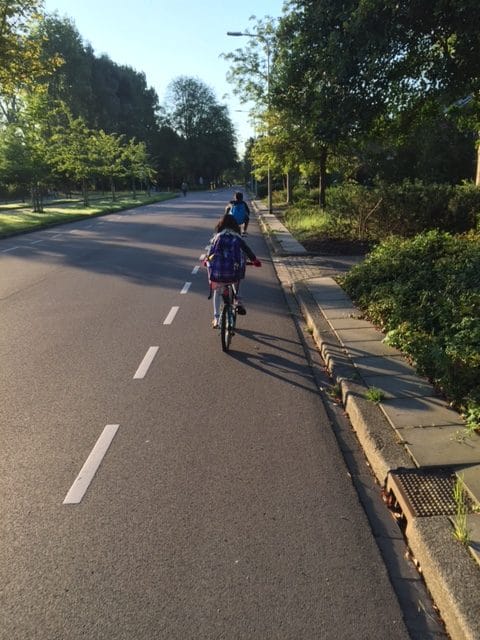 NETHERLANDS: Get Right Back on The Bicycle 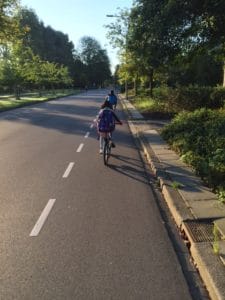 Seven years ago, we moved to Lagos, Nigeria with a sixteen month old and a three year old. When we came back to the U.S., we suddenly had a four year old and a six year old!

We have been in the U.S. for four years and this summer, our family has embarked on our second expat assignment outside the U.S. Last week, my children and I arrived in The Netherlands. My husband’s job has brought us here, and he has been working here for the last few months while my children finished up school, and I squared the sea shipment away.

This is not the first time our family has moved so far away from our home, but it is the first significant move for both of my children. When we moved back from Lagos, they were practically babies ( ages 4 and 6). They were a bit sad at the time that their playmates weren’t coming back with them, but honestly, all they cared about was that Mom and Dad were with them. This time, was a bit of a different story…

When we first told the kids we were moving back in December, they were almost panic stricken. My son (who is going into fifth grade, age 11) immediately said he didn’t want to leave all of his friends. My daughter (who is going into third grade, age 8) worried about what our new house would look like. What if no one would like her in her new school. They were both worried they wouldn’t understand the language around them. I completely understood how they felt as I had moved around a bunch of times while I was growing up because of my dad’s job. I knew the feeling of worrying about fitting in, a new house, new school, new friends.  All the things that are so very important in a child’s eyes. And, I was asking my own children to do just that, and also to go live in another country all together!

It wasn’t easy at first convincing them it was ok. I tried to remember my own feelings about moving every two years while I was growing up and feeling like I had no control over what was happening to me. I knew I didn’t want my own children to feel as if their own feelings and thoughts about the move didn’t matter. My husband and I talked with them A LOT. He was going first, so he would talk to them about what they wanted in our new home. He made sure to bring things in the first shipment and in his luggage that they would already see in our new home when we arrived for a visit earlier this summer. I made sure to let them know that it was ok to talk to me if they were feeling unsure or anxious about moving. The good news for them is that we are going to be moving back to the U.S. in a few years, and many of their friends that they are saying good bye to now may still be there when we move back. My husband and I wanted them to know that their thoughts and feeling did matter to us through this transition and that we were going to listen to what they had to say.

They both talked to me and wanted a going away party with their closest friends, and we did just that. They got to pick exactly what they would want to do with their friends.  (My son had a game truck come to our house, and my daughter had a p.j. and movie party with her friends). All of their friends signed a matte frame for both of them and we made sure to take a picture of them with all their friends that we could take with us and hang it in both of their new bedrooms. Most of all, I wanted them to know that friends are friends even if you don’t live in the same place at the same time.

And just like the song, “Make New Friends” says, we also talked with them about the importance of being open to making new friends in our new home. We approached our new move as an adventure…not an end to something.

Last week, we arrived in The Netherlands, and both the kids were extremely nervous about a new place to live. Happily, we have discovered how much the Dutch people LOVE riding bikes EVERYWHERE!!!! Biking is something my kids love to do. They have also discovered that the stroopwafel may be the BEST thing ever invented. They observed their own mother falling off a bike in an intersection, and watching me laugh at myself!

Tuesday was their first day of school, and as we biked to the school that morning, they were both very nervous as they heard so many children speaking Dutch. They didn’t understand a word, and neither did I. I don’t think anyone has ever felt the most unsure feeling in the world until you are among everyone who is speaking a different language than you.

I looked at both of them and told them that we are in The Netherlands, and people will speak Dutch most of the time. Just like in the U.S., people speak English most of the time. I explained to them that they would be taught in English, and it was ok to feel uncomfortable in a new place. But, most importantly, they needed to remember to be open to new things and to focus on the adventure we are on.
Preparing for this expat move with my school age children has taught me that my attitude towards the move is contagious. If I can laugh at myself and show that I am willing to accept the differences and the uncomfortableness in our new home, so will they. (I’ll have to talk about forgetting my shopping bags every.single.time. I went to the store last week another time!) Our children watch everything we do, and if we show them that we are ok, they will follow suit.  Just like getting back on a bicycle when you fall off, as an expat, you pick yourself up when you are uncomfortable and make mistakes in a new place and get right back “on the bicycle”.

I am happy to report that they both had great first days of school this week. Both of my children are the only ones from the U.S. in their classes, and they are both so excited about that! We may have many falls off our bicycle here but we will always, always remember to get right back on! There are just too many news things to see and do here.  We can’t let little things get in the way of our adventure. We are so excited for this great new adventure in The Netherlands, and I can’t wait to write all about it on World Mom’s Network.

Have you moved with older children? How did you ease their fears and anxieties about moving?