KENYA: Facing pressure to have a child 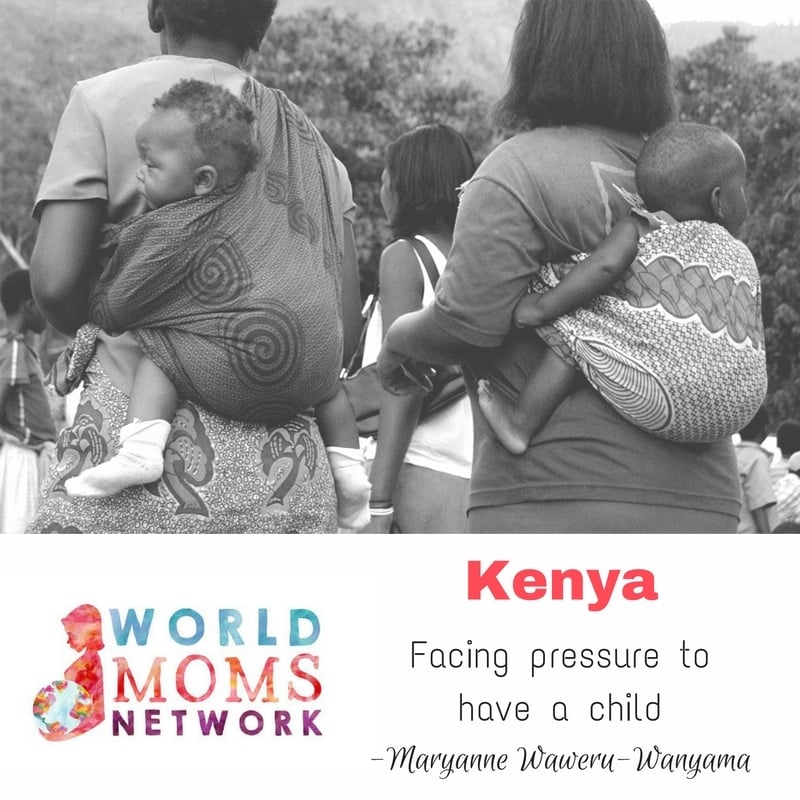 There’s a reality that’s been gnawing at me for a long time. I’m talking about the pressures that face women – unwanted pressures from society.

As soon as you hit the age of 25, people start asking, “When will you get married?” After your wedding they will ask, “When is ‘our’ firstborn arriving?” If your firstborn child is a baby girl, they will ask, “So when are you giving ‘us’ a boy?” And if your firstborn is a boy, they will ask you, “When are you giving ‘us’ a second child?” Even if you are lucky enough to give them all of that, they will demand a third, fourth and fifth child, because you must give them a namesake. In my African culture, we name our children after our relatives. It is a great honor to have a child named after you. Therefore, every relative will constantly put pressure on you to have more children so that you can give them a namesake.

In my country, there is a certain celebrity news anchor who recently married  an equally famous gospel musician. The wedding was in December of last year, just eight short months ago. Since then, the public has been DEMANDING that the lovely couple give them a child. The public reacted horribly when the woman recently shared an old photo of herself on social media. It was a throwback photo of herself as a teenager in high school, reminiscing of the good times she had in her youth. The photo somehow made it to a popular online entertainment and gossip site, and the comments that followed the post were shocking.

“So now you are showing us photos of when you were a girl? Why not of now? Are you trying to hide something? Are you barren?” another asked.

“Give your husband a child now otherwise he will go looking elsewhere,” another said.

“If you’re having problems getting pregnant, inbox me. I’ll sort you out,” another offered.

Hundreds of comments followed, all of a similar nature.

It made me sad. Why does society put so much pressure on people? On couples? On women? What if the couple is not able to have a child? Or if they have been trying, unsuccessfully? What if they have suffered pregnancy loss – something they may not want to openly talk about? Or if they do not even want a child in the first place? Is it the public’s business? Society’s business? Their relatives’ business? Or is it between the husband and wife?

Seriously, as women, we have a lot to deal with, and we do not need societal pressure adding to our nightmares. Unfortunately, that is exactly what we face. In a society where a woman’s worth is valued by her reproductive prowess, it is indeed sad. In my culture, a woman may have achieved many notable feats and broken the glass ceilings over her head, but if she is not married (or, even worse, does not have a child), then she may just be nothing. Society will be harsh on her. That is, if they even recognize her.

But you know what else is interesting? Who is this society that we are talking about? Who are these people?

It is you and me. Us. We are the society. We are the same people who, when we meet a friend who got married over a year ago, will, while shaking her hand, be staring at her belly, trying to catch a glimpse of how swollen it is. Or whether it is swollen at all. Sometimes we do it consciously, sometimes we don’t even notice we are doing it. It just comes naturally. And then we talk with our other girlfriends saying “Lucy is not getting any younger, I wonder when she’s planning to start having babies.” That’s the pressure I’m talking about.

We all need to be a lot more sensitive to what fellow women go through. I hope you and I can make the difference.

This is an original post for World Moms Network by Maryanne Waweru-Wanyama of Mummy Tales in Kenya.