Friday Question: What TV programming did you first introduce to your child(ren)? 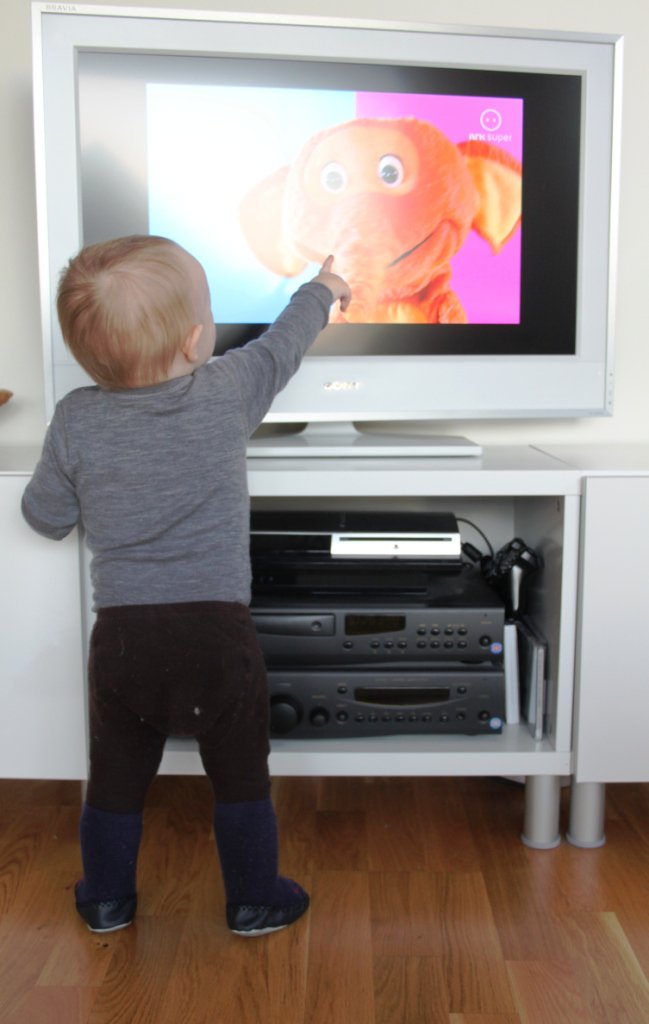 This week’s question came from one of our writers, Dee Harlow, who asked…

“What, if any, TV or video programming did you first introduce to your child(ren) and how old were they?”

Maggie Ellison of South Carolina, USA writes:
“We started watching, well actually listening to, Baby Neptune and Baby Galileo when my son was a baby. The music was so relaxing it just helped set a peaceful environment.”

Karyn Van Der Zwet of New Zealand writes:
“We had TV, etc. right from when our first boy was born.  Then, about five years ago, we completely removed all electronic entertainment from the kids’ lives.  We rank it as one of our top parenting decisions.”

Veronica Samuels of New Jersey, USA writes:
“I started introducing my daughter to Baby Signs, sign language for babies before they have the ability to talk, at 6 months old. At about 8 or 9 months, I introduced her to the Baby Signs DVDs. They really helped her learn more signs and helped us communicate together, so I took a chance and disregarded the advice about introducing TV at such a young age.”

Asta Burrows of Norway writes:
“We have had the telly on from time to time but he never really paid much attention to it (unless the Baywatch theme song is on, he loves to “dance” to that”) .  But then one day, when he was 13 months old, he saw a Norwegian kids telly character called “Fantorangen” – a orange and pink mix between an elephant and an orangutang. And then he suddenly started pointing at the telly and was very interested!”

FireCrystals of India writes:
“My lad is more interested in TV ads which have kids (preferable babies) starring – so right now, his favourite are the ads for Pampers and Huggies. Another favourite is the ad for Red FM, an FM channel available in India. Even if he is about to go to sleep, the moment he hears the jingle for any of these ads, he jumps out of his cot, sits up straight and avidly watches the ad.”

DC Blogmama of Washington, DC, USA writes:
“I accidentally found this great classical poetry animation program on HBO called Classical Baby and this particular episode that we have saved to our DVR features animated recitations of poetry by Robert Frost, William Carlos Williams, Langston Hughes, Gertrude Stein, William Shakespeare and others. The narrators are some of the actual poets and also actors like Susan Sarandon, Gwyneth Paltrow, and Andy Garcia. It’s really sweet and makes me feel less guilty about letting our daughter watch “teebee”. I think we stumbled upon it when she was 16 months old. And she asks for it by saying “Baby”.

Prior to that, around 12 or 13 months we started showing her whatever Urdu children’s videos (2-5 minutes) we could find on YouTube. An early favorite was “Ek Bandar ne Kholi Dukaan” — “A Monkey Opened a Store” and other animals came to shop/visit.”

Kirsten Jessiman of Canada writes:
“Both of my kids loved the Baby Einstein series when they were babies. Some of the DVDs helped my older (autistic) son’s communication a lot!”

Kally Mocho of New Jersey, USA writes:
“I introduced my daughter to Baby Einstein when she was an infant. I didn’t introduce my son to television, but he discovered it on his own since he had an older sister who loved to watch it. My son is a big fan of Sesame Street and I approve.”

Eva Fannon of Washington State, USA writes:
“I don’t remember what age we introduced our first child to TV at, but it was around age one.  When we did let her watch, it was only the PBS Sprout a channel with 24-7 pre-school programming (and perhaps an occasional National Hockey League game).  I’ll never forget one night she woke up about 2 AM and was crying inconsolably.  We diapered her, tried to feed her, rocked her and nothing seemed to calm her down.  My husband then turned on PBS Sprout to find Boobah playing – which made her stop crying in an instant!

Now we don’t have cable TV, so anything she gets to watch is on DVD.  It works out quite well for us because it’s easier to monitor what she watches and for how long.  The other plus is that she doesn’t get exposed to commercials.  Our youngest may see the TV on when her big sister watches, but up to now has not shown interest in it – she crawls right past it.”

Dee Harlow of Mexico writes:
“I really appreciate all of your responses, especially the global perspective. I feel pressure to not introduce TV until 2 years old which I believe is a very American thing, but am torn about the possible benefits of learning from certain programs. I will definitely look into some of your children’s favorites!”

What about other parents out there…what, if any, TV or video programming did you first introduce your child(ren) to and how old were they?

Come back on Sunday to check out next week’s travel itinerary!