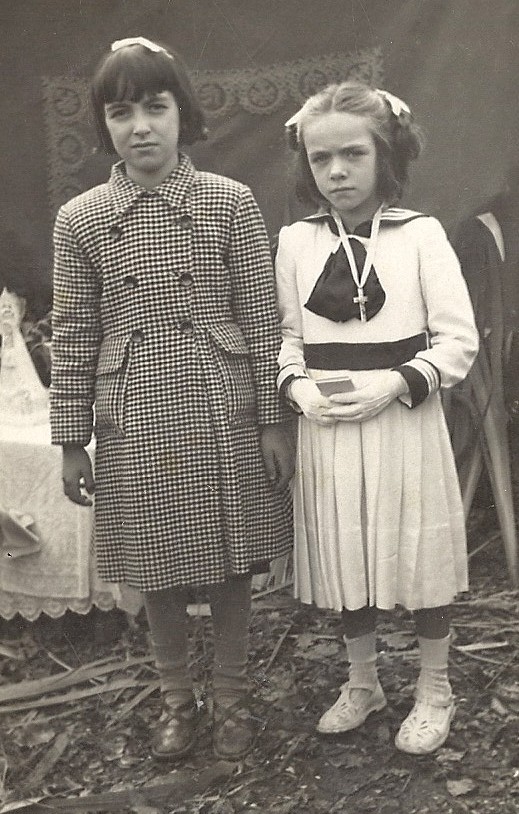 On March 13, my mother celebrated her 69th birthday.  I am thrilled to still have her in my life, and I cherish every moment we spend together.  You see, two years ago she was diagnosed with stage 3 ovarian cancer.

On the day she received her diagnosis, she was immediately admitted to the hospital.  We had no idea what to expect.  I was eight months pregnant at the time and could not stop crying, day and night.  My mother spent Christmas in the hospital, making it the worst Christmas EVER, then she had extremely invasive surgery which left her in the ICU for days.

Once she was strong enough to undergo chemotherapy, she completed six rounds over a period of about 5 months and was cancer-free.  In the spirit of celebrating her recent birthday, I want to honor her by sharing the incredible life she has lived.

My mother was born in 1942 in rural Spain.  Her mother suffered from tuberculosis and was 47-years-old at the time of my mother’s birth.   Due to complications associated with the birth, my grandmother died two days after my mother was born.

There were nine children in the family, many of whom were shipped off to be raised by other relatives.  My mother remained in the home and was raised by her 14-year-old sister.  Unfortunately, my mother was treated like nothing more than another mouth to feed.  She never received any affection from anyone, and her basic needs were barely met.

Although they were poor, my mother said that she never felt she was because everyone around her was poor.  The most important thing missing in her childhood was someone who cared about her.  My mother told me a story about how one of her childhood friends, Mari Carmen, would bully her.

For example, Mari Carmen wouldn’t let my mother go home using a cleared path, so my mother had to walk through mud and tall weeds.  One day, my mother tried to do the same thing to Mari Carmen.  Mari Carmen called out for her mother who then responded to find out what was going on.  My mother remembers wishing she had someone to call out to for help.

My mother attended school for three years, from age 8 to 11.  At the age of 13 she was sent to live with a family to be their maid.  Needless to say, she didn’t have much of a childhood at all.  The only picture that exists of my mother as a child is a picture of her on the day of her First Communion.  She is standing with her sister.  They both look absolutely miserable.

I recently learned that my mother’s home didn’t have electricity until she was 16-years-old!  I was shocked.  They grew their own food, spun their own wool, and knitted their own socks.  It is the polar opposite of the suburban American childhood in which I was raised.

In her twenties, my mother worked as a cook in several different restaurants.  She met my father when she was almost 30 and they married three months later.  They came to the United States about a year later while she was 8 months pregnant with my oldest brother.  (I guess they allowed super pregnant women to fly back then.)

My father had gotten a job as a truck driver in New Jersey, and jobs were scarce in Spain, so they decided they would live in the U.S. for about 5 years then return to Spain.  Thirty-eight years, three children, and six grandchildren later, they are still here.  They have a home in Spain and visit often, but they have embraced the American lifestyle.

When they first arrived to the U.S., my parents moved into a small apartment in Newark, N.J.  My mother didn’t speak one word of English before moving to the U.S.  She gave birth to three children in three years and learned how to drive for the first time.

She credits Oprah for teaching her English, and Dr. Phil for helping her work through the issues related to her childhood.  Her life was never easy, but she has survived it gracefully.

Ama, as we call her, wasn’t an affectionate mother at all, but she showed her love for us in other ways.  She valued nutrition, education, and health.  By today’s standards, she may have been labeled physically and emotionally abusive at times.  However, I don’t hold any negative feelings towards her because I recognize that given the childhood she had, she didn’t know any better.

My mother has told me how much she regrets the way she treated us and how she knows it was because of the way she was treated as a child.  As a grandmother, she is completely different (as I assume most grandmothers are.)  She is always ready to give hugs and kisses and to hold her grandchildren on her lap.  I’m happy she’s had the opportunity to enjoy children in a way that she didn’t have the capacity to when my brothers and I were little.

This past November we received the bad news that my mother’s cancer had returned.  She is currently undergoing chemotherapy for the second time.  She never complains, doesn’t want anyone feeling sorry for her, and does not fear death (or at least she makes us believe that).

She dedicated her life to being a good mother, something that she never had in her own life.  I feel fortunate to have had such an amazingly strong and resilient woman to be my role model.

Sometimes I am completely amazed at how different my life has been from my mother’s.  Every time I hear a new story from her childhood, I am shocked that we’re related.  We haven’t always seen eye to eye, but I deeply admire and respect the woman she is and the obstacles she has overcome.  And today, I’m happy that I have another day with her in my life.

What do you most admire about your mother?  How are you different from her?