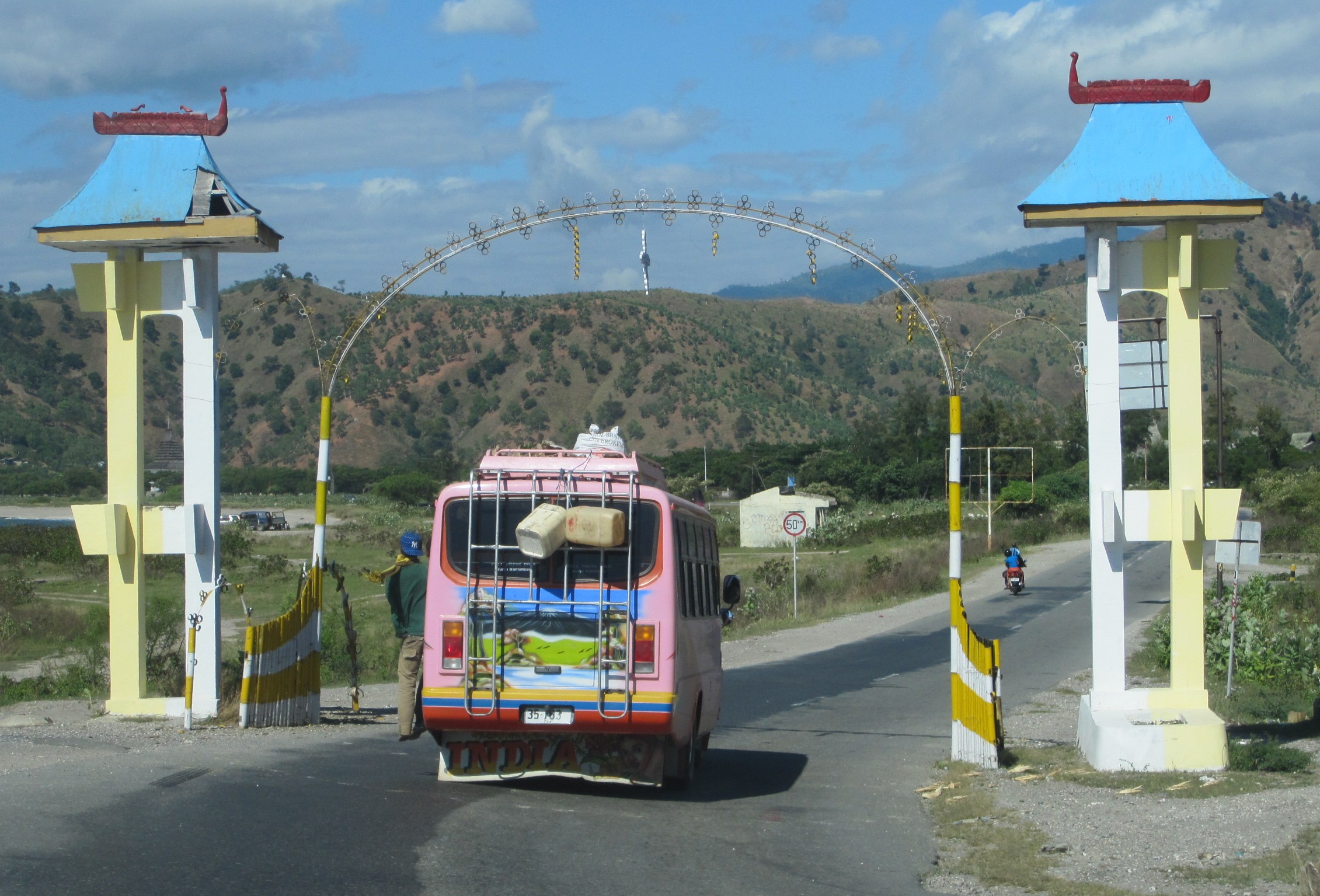 To be fair, driving in Dili can’t really be compared with most other urban areas in this part of the world. Though it is a capital city, it’s more of a sleepy town than a sprawling metropolis. Traffic rarely moves faster than 35 mph, so it doesn’t feel particularly dangerous or difficult to navigate.

The curious one-way system can make things tricky at times (and the fact that most streets don’t have names), but even the busiest main roads are just two lanes.

However, driving can still be frustrating. According to the US State Department: “Driving in Dili is especially hazardous, with large trucks and military vehicles sharing the streets with vendors, pedestrians, and livestock.” Yep.

In general, traffic rules are a loose concept here, and you can’t always assume that the usual ones apply. Very few drivers have insurance, and as far as I know, there are no driving schools in the country.

Road conditions can be poor, and giant potholes seem to appear overnight and stay for weeks. Cars and motorbikes (carrying families of five) will frequently pull into traffic without looking, or will suddenly stop in the road with no warning. Seat belts and child restraints are rarely used.

Some cars (and most taxis) drive painfully slowly…plodding along at 10 mph, oblivious to the line of cars behind them. Dangerous overtaking is common, right-of-way is negotiable, and traffic lanes are really only a suggestion. Just yesterday I saw a (UN) vehicle drive on the sidewalk to avoid a stalled car instead of going around it like the rest of us. Anything goes, really.

Basically, driving here requires intense concentration, which can sometimes be challenging when I’m also trying to broker a backseat truce, retrieve dripping juice boxes, or locate that one CD with the “dinosaur song.”

Each day I spend close to an hour and half in the car—ferrying our little ones to and from preschool. Most of the time I enjoy having dedicated time to sing our favorite songs, hear about school and make plans for the day.

It’s also fun to talk about the things we see along the way…impressive heavy machinery, stern looking traffic officers (all five stop lights on the way to school are currently out), and all kinds of things tied on either side of a pole and balanced on shoulders: vegetables, potted plants, chickens, and piglets (my least favorite sight). A few weeks ago we even saw a man wheeling a giant swordfish along the sidewalk in a rickety cart. Just a regular day in Dili. 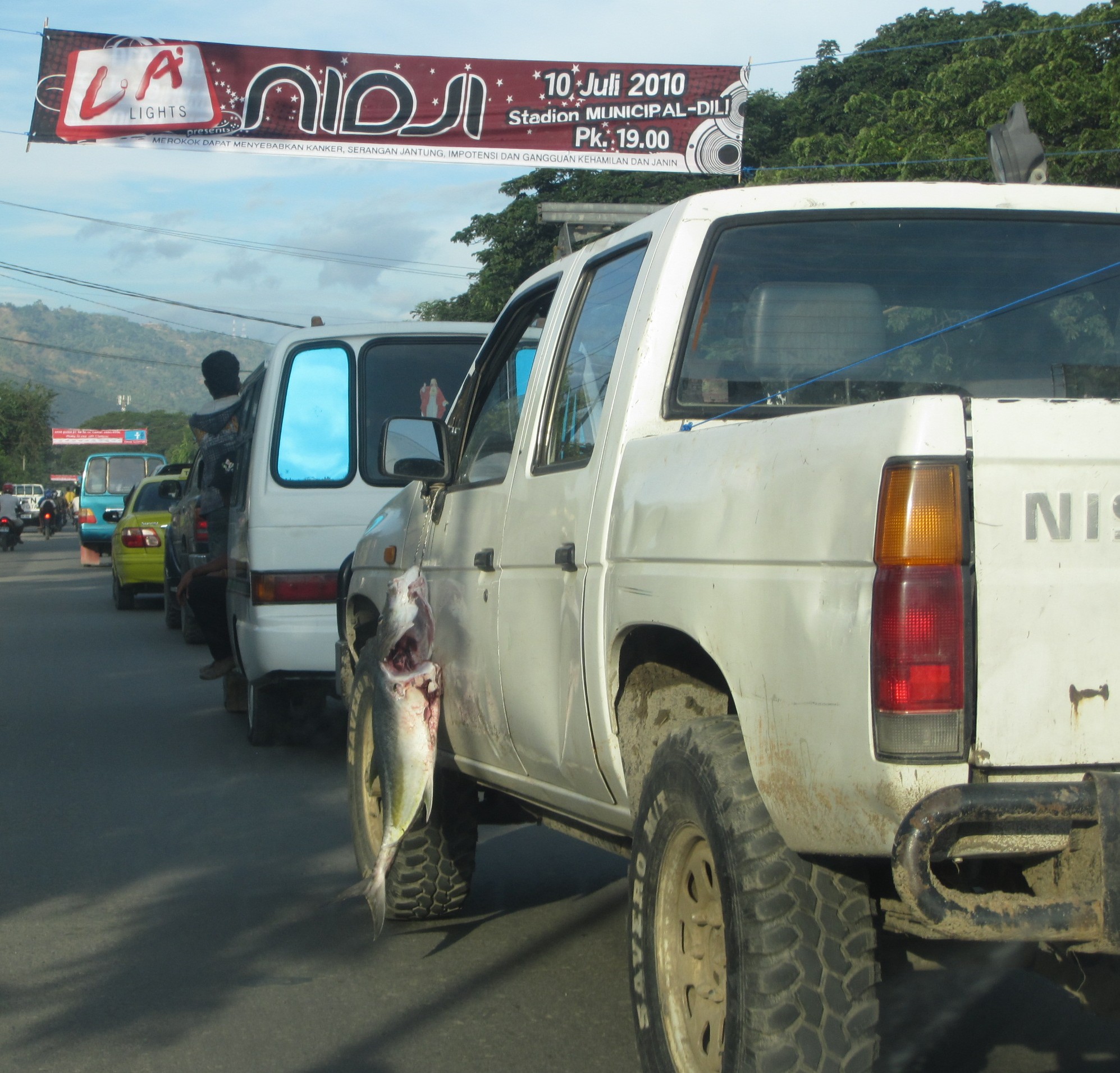 Have fish, will travel.

Usually I try not to voice my annoyance at the sometimes silly driving around me. But even when I do, my comments are usually pretty mild, throwing out an occasional “you’ve got to be joking!” or an “aw, c’mon!” when cars push in obnoxiously or overtake only to brake immediately. But, I had to laugh the other day when my son shouted from the backseat: “let my mommy go!” as I waited for a gap in traffic. Clearly my impatience was more obvious than I’d realized.

All of this time in the car has recently gotten me thinking about, well…cars. And, their place in my life.

For the majority of my driving years, I have navigated the world without a car. While living in Paris and New York, I happily joined the ranks of the subway-traveling masses. During a brief post-college stint as a ski bum in a tiny Colorado town, hitchhiking was a common way to get around and I often thumbed my way to work and beyond. In San Francisco, I regularly brought my bike with me on public transport and occasionally borrowed my Dad’s purple Pontiac (complete with rainbow flag sticker and ‘GR8 R8S’ license plates).

In Brighton, UK, I was a committed bus rider and the double-decker novelty never quite wore off. In Prishtina, Kosovo, my one-block uphill walk to work was convenient, through icy and treacherous in winter. Flying around Asmara, Eritrea on my trusty green bike made me feel free, and I still regret leaving it behind.

When my husband and I moved back to the US in 2005, it was time to get a car, and for the very first time I signed away my life for four wheels and low miles. The twins arrived a few years later, and suddenly, our sporty ride became a full-on family car, complete with child seats, dog, and roof box. Though we loved taking long road trips, our city driving was relatively limited. My husband usually biked or took the bus to work, and I would walk whenever I could—often hauling groceries (and kids) home by stroller and working from neighborhood cafes or libraries.

In Dili, a car is a necessity for me. Local transport isn’t really a viable or safe option with small people in tow and sidewalks can be an obstacle course. Though we’ve been here for a year, we have yet to unwrap our beloved double stroller (and probably never will). Mostly because of the heat, I walk less than I ever have and I really miss it.

Yet strangely, I just might miss crazy Dili driving when we visit the US this summer. Yes, it is frustrating at times, but there is also something liberating about living with such bendable rules. Or at least, that’s what I will tell myself on the way to school tomorrow.

What kind of transportation does your family regularly use? Do cars play a big role in your life? Has anything changed since you became a parent?