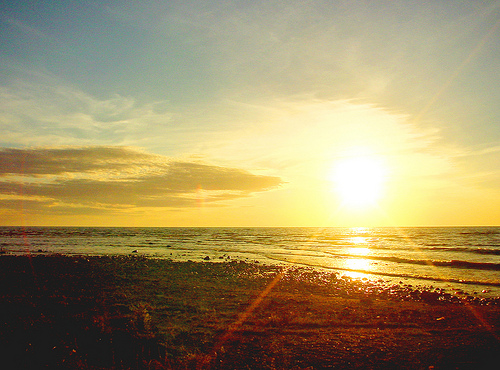 I am not certain what made me do it, but I decided to go for acupuncture. Well, I can pinpoint a number of things that pushed me in that direction…

First of all, I just haven’t felt “myself” since the birth of little girl. And, she is about to turn two. When I mentioned baby blues to my OB/GYN soon after her arrival, he pushed it aside and said it will pass.

But, maybe it didn’t.

The straw that broke the camels back, as the say in the United States, was the day I got SO ANGRY that I yelled at big girl in public and stormed off from my family and went to the movies alone (I saw Harry Potter 7 Part 2 – which I must say was the perfect escape). My behavior was like a clip from Nanny 911 or Supernanny. I hated feeling so out of control, but couldn’t seem to rein it in either.

So, the next day, I contacted an acupuncturist that I knew. I had met his wife at pre-natal yoga classes and knew a friend went to him while pregnant. He specializes in pre and post natal, fertility and family. Perfect!

Up until this point, I had very little exposure to acupuncture and Chinese medicine. I have always been intrigued by eastern cultures and their practices. I love yoga, have read about Buddhism and believe in Feung Shui.

And, more importantly, I was concerned that if I went to my OBGYN or family doctor, I would simply be handed an anti-depressant or put on birth control. Not that there is anything wrong with either of those remedies, I just wanted to go down a different path first. Because as a wise woman once told me about acupuncture, “nothing goes in, nothing goes out.”

So, I found myself on Friday at the home of a local Chinese doctor. I felt a relief from the minute I got there. For the first time, someone listened to me and how I was feeling with understanding, care, and no judgment (maybe I guess I could have just seen a therapist!) and validified my symptoms – that hormones DO, in fact, rule my body – and, that I could be supported by acupuncture and work to control them.

So, after a good cry, and a description of my feelings and too many details of my bodily functions, my acupuncturist checked my pulse and my tongue. I then laid back on the table while he inserted the needles.

How many needles exactly? I don’t recall. But, some made a lasting impression. The needles were placed on the crown of my head, in the middle of my forehead (third eye), behind my ears, elbow crease, the soft spot between my thumb and index finger, wrist, knee, feet. I then sunk into the table and let myself rest.

It was truly amazing to feel the energy whizzing around my body! Half way through, he checked on me and my tongue. I rested some more – it was extremely meditative. The needles were then removed, and I went home.

What was strange was the feeling I had during and after the treatment. Some of the spots were intense (like the ones behind my ears), while others I barely felt or knew they were there.

When I left the first day, I felt a little spaced out. Thankfully, when I arrived at home, little girl was napping and big girl was at preschool. So, I, too, took a nap. I later had a heightened sense of smell like never before– the perfume I always wear suddenly smelled too strong and followed me everywhere (obviously since I put it on!). The next day, my right eye kept tearing. It was as if I had all of these built up tears that were suddenly released. And, I felt lighter! More like my old self!

I went back for my second treatment a week later. I told him how I felt after that last session and how I was feeling that week. The good feeling kept with me until the day prior to my second treatment. I then felt the heaviness set in again.

The needle placement was similar to the first, but not exactly. The effects the second session were not as dramatic as the first but again it made me feel good, calm, light and in control of my emotions.

Recently, I had my third visit in three weeks. It is always interesting to both, me and my acupuncturist, which spots I feel and which ones I don’t. It changes from visit to visit. The spots behind my ears do not bother me any more. Now it is the one on my hand and the one on my foot – which I can still feel hours later.

I also learned something incidental, but important, about my body, and it functions at each visit. For example, on my first visit we talked about my eating habits. Not so much what I eat, but how often I eat. And my acupuncturist told me a lot about blood sugar and coritsol level. We determined that eating breakfast at 10, when I get up around 5:30, it not good for my body. He recommended a morning snack that is high in protein and fat.

I have started eating a morning snack (before I was simply drinking WAY TOO much coffee) and do feel better at the start of the day. We also talked about night waking. And he hit the nail on the head as he describes how the body functions. Again, I learned that I need a little snack closer to bedtime.

In order to further support my body, he gave me some herbs. I was so scared of them (more about the taste) that I had not opened them until I started writing this. They actually do not smell as bad as he made them out to be. He also gave me tips on how to make them easier to swallow. I am going to try adding them to a cup of strong tea (I would never ruin a cup of coffee!). The prescription is for twice a day, but hopefully I can take them at least once a day before my next visit.

Today, he told me that my tongue is changing – for the better. And, we can now move to treatments once every two weeks.

So, is it REALLY working or is it a placebo effect? I don’t know. But, I feel better ,so I am going to stick with it for now. Millions of people can’t be wrong!  Can they?

Have you ever tried an alternative medicine?  If so, please tell us about it and what was the reason you tried it. And, did you feel like it helped you?

This has been an original post to World Moms Blog by A. Roselyn of San Francisco, California.

Photo credit to kcsqd.  This photo has a creative commons attribution license.