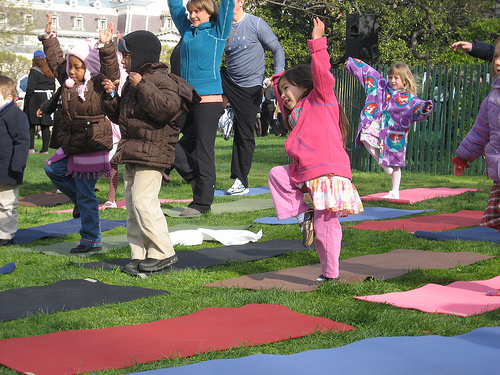 Lately, I’ve begun to think of incorporating yoga into my routine with my daughter, Bella, who just turned two. She’s always loved to watch me do it, but for a while it was frustrating to try to practice if she was awake. She’d run around, knock me over, pull my hair to get my attention, or come lay on me during a pose.

I started to do it just during her nap instead.

But the past couple months, I’ve seen her begin to take notice of things she’d never really been interested in before. So a few weeks ago, I began to do yoga with her around again.

She was smitten with the mat, loving to walk on it with her bare feet. As I encouraged her to sit next to me for the beginning stretches, she would smile and try to mimic what I did. END_OF_DOCUMENT_TOKEN_TO_BE_REPLACED