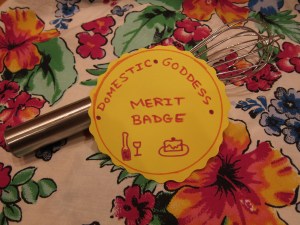 Back in March of 2011, I wrote a post for World Moms Blog titled “Searching for My Inner Domestic Goddess,” which detailed my numerous shortcomings in the traditional homemaking department. Since writing that post, I have spent some time trying to broaden my domestic horizons, specifically in the kitchen, and I am pleased to report that I no longer think I can accurately claim “I can’t cook.”

Now, I am not great. Not by any stretch. I make many meals that could be described as edible at best. But I am learning and have successfully pulled off some new dishes. Check out this root vegetable pie! 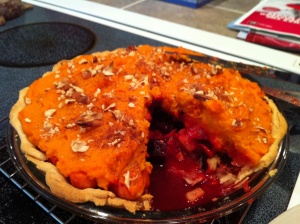 It’s pretty and tasty and not nearly as hard to make as I thought it would be. I guess that last part of the prior sentence has been my biggest breakthrough with kitchen confidence – that many things are really just a matter of chopping, sorting and adding at the right time. For this dish in particular, I cooked with beets and turnips for the very first time in my life.

I’ve seen these vegetables in grocery stores, but I would ask myself “What the heck am I supposed to do with that?” and then reach for the carrots. Well, it turns out that you cut them up, dribble them with olive oil, and put them in the oven. Then you have cooked beets and turnips that taste great with minimal effort and can be added to all sorts of things. Imagine that!

Yet, I still have my share of failures. For example, I was making gravy for Thanksgiving dinner from one of those instant flavor packets (yes….I know…stop shaking your head), and I didn’t add the turkey-essence-powder at the right time, so I ended up with clumpy, watery gravy.

For crying out loud, IT’S INSTANT GRAVY. It takes a special kind of person to mess that up.

And I have worked on meals that went directly into the trash. Plus we still do a ton of quick, convenient meals. But I have done a better job of meal planning and have worked on some strategies to support my cooking efforts. For example, I am trying to make the more time consuming meals at lunchtime instead of dinner. My husband is not usually home by the time our kids need to eat, and it’s a zoo during the hour leading up to dinnertime. So if I make the tougher stuff over lunch when I am just home with my toddler, I can reheat it for dinner and have time for any back up food preparation (My kids are picky eaters, and I do usually have something basic for them as a fallback).

With this boost in confidence, I recently took my newly honed cooking skills outside the home. I volunteered to organize a teacher appreciation dinner at my son’s school during parent-teacher conferences and made two of the main entrees myself (Shepard’s Pie and Mushroom Casserole). 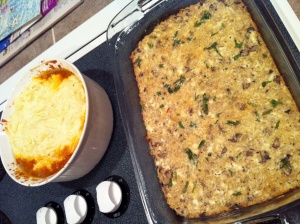 They were a hit, and the PTSA President referred to me as the “Meal Chair” for the event (ME! The “Meal Chair!” Who would have thought?!).

But, perhaps, one of the best parts of putting in more effort in the kitchen is pulling off some dishes like this one. 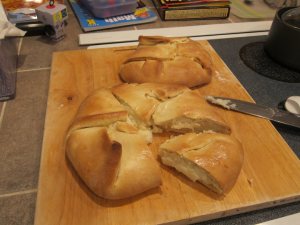 This is a Pagach, which is basically a giant doughy ball stuffed with mashed potatoes. It’s something I grew up eating, but as I now live 3000 miles away from my hometown, I don’t come across it much. To be able to make things like this when I am missing my family really does put the “comfort” in comfort food.

I don’t know what’s next for me in the kitchen, but I am no longer overwhelmed to find out. I am proud of having improved my kitchen-street-smarts. I have been able to think on my feet when missing certain ingredients. I have learned how much a “glug” is. I understand the umami factor and what types of things produce it. I have gone rogue and used white wine instead of apple juice in a recipe. I own 2 aprons. And, I can correctly pronounce “quinoa.” Perhaps my inner domestic goddess is just a late bloomer and now starting to emerge. Better late than never.

What has been your latest domestic success? (And feel free to share a funny failure too!)

This has been an original post to World Moms Blog by Tara B. of Washington, USA.