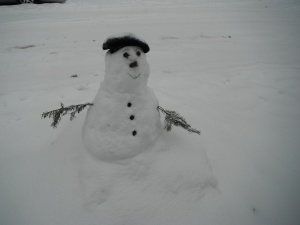 I don’t want to poke too much fun at the Seattle snowstorm, because 1) then I wouldn’t be writing this post, and 2) there were people who lost power – some up to a week – during the storm.  The issue is that, since these storms are not typical weather out here, the City of Seattle is not equipped to deal with the salting and shoveling needed to keep the roads clean/clear enough for predictions of a snowpocolypse…or when we actually get one.  So it becomes a matter of safety – better to keep people off the roads so they aren’t causing accidents (since they don’t know how to drive in the snow).  For that reason, Seattle Public Schools closed the day before the snow actually started falling and my work closed once it started accumulating.

Since I work full-time out of the home, Saturdays turn into “get all the household chores done” day.  My husband and I try to divide and conquer.  We’ll take turns watching the girls (5 yo and almost 2 yo).  He’ll do the grocery shopping, and help out with some laundry (I’ll admit, I don’t like how he does laundry, so I insist he just does his laundry and I do mine and the girls’), while I do the vacuuming, mop the floors, and wash the bathrooms.

This can be boring for the kids, but it needs to get done, so we try to incorporate them.  The oldest likes going food shopping and even begs to help out with vacuuming.  The youngest likes to “sort” laundry and tosses clothes into the machine.   My issue is that I feel bad about not having time until Saturday afternoon, or sometimes Sunday, to do things with them one-on-one.

So back to the snow storm… it was enough snow to shut the city down for three and a half days.  For three and half days I got to be a SAHM – and I LOVED it!

My girls and I sat down to have breakfast together without rushing around.  We went out for walks (in the snow), we had a play date (to go sledding), we went to the playground (to make a snowman and do more sledding), we danced, we read books, we played with blocks, we made art, we baked cookies.  I even enjoyed planning and preparing complete dinners at a leisurely pace, instead of my usual rush.  It’s not that I don’t ever get to do these things, but I rarely get to do them for so many days in a row – and work was closed, so I wasn’t worried about what I needed to get done there.  It was REALLY nice!

Sure, I’ll admit I was a tad bit jealous of the co-workers without kids who reported curling up on their couch in a blanket and reading a book, or watching a movie.  But having kids was the perfect excuse (though I’m not sure why we really need one) to just get out there and play in the snow.  It was kind of like Christmas – it made ME feel like a kid again, living the excitement of playing in the snow through their eyes.

So what did the “Seattle Snowpocolypse” teach me?

During one of our sledding adventures, I went down in a sled with my youngest.  At the top of the hill, a woman borrowed her son’s sled and waited for us to go down.  As I picked up our sled at the bottom, the woman came down on her son’s sled.  Her laughing scream echoed as she came down the hill.  When she stopped at the bottom, she looked at me and said, “Wow, that was really fun!”

I laughed with her.  I loved that she “let go” and had fun.  It made me realize…that’s what I was doing during this little break.  I was letting go and just having fun with my girls – the way it should always really be!

What about you?  Is there something you’ve learned, or realized, that you wanted to apply to your way of living?  What was it, and how did it go?

This is an original post for World Moms Blog by Eva Fannon.  Eva can be found on Twitter @evafannon.  Photo credit to the author.