INDIA: Bonding Between Mother and Child 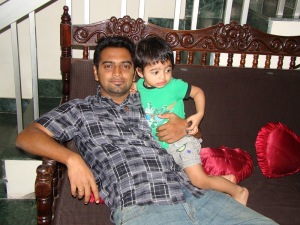 Tonight I was watching a movie ‘Mother and Child’ and some of the scenes in the movie suddenly brought home to me how much it paralleled my own thoughts. And I got down to penning this post.

Nearly two-and-a-half years ago, I was ecstatic about being pregnant. Every time I heard that a friend had a baby or that another one was pregnant, I was left wondering: “When will it be my turn?” or, as we say in India: “Mera number kab aayega?*”  Thus it was with great elation that I received news of my own pregnancy.

I was all set for the long nine months and soon realised that a pregnancy was not the cake-walk that it was made out to be in Indian movies, where the heroine was assumed to be pregnant as soon as she started vomiting after marriage, and then there was a song sequence in which the family (especially the husband) got all excited and crazy buying toys and pampering the lady, and at the end of the song they showed the heroine cuddling a baby.

Before long, I was able to make out that real life didn’t exactly work that way – especially with a demanding job to juggle and being unable to eat anything because of the constant nausea. Throw in some mood swings, the inability to sleep comfortably at night, and the constant bathroom visits, all of which equaled an extremely crabby me. Only a husband with the patience of a saint, like my own, could have put up with me during that time.

I had heard of the sleepless nights, the constant feedings and cleanings that accompanied taking care of a baby. I thought I was prepared for all of that – all I wanted was the baby. I was going to love it and cuddle it to sleep. I am extremely embarrassed about it now but little did I know that the birth of the baby was also going to create a monster inside me.

I hate to say this – but it is the truth – I hated the fact that I could hardly walk for two weeks after giving birth; that I had very severe constipation and could hardly sit due to it; that I hardly ever got any sleep at night because the baby was always crying; that I was always expected to sit and nurse the baby every time it cried.

And most of all, I hated the ‘being’ that had destroyed my peace of mind and lifestyle.

It was always self-pity and “Why me? Why me? Why me?” There were times when I longed to go back to the pre-baby days when I could just curl up with a book or a movie, munch on something and while away the time, without an ear open to see if the baby was still asleep.

Actually, my fondest wish during those days was to get eight hours of blessed, uninterrupted sleep.

Contrary to what so many people think, or movies or books say, I was finding out that you don’t just love a baby unconditionally as soon as you give birth to him, see him or have him in your arms for the first time. You need to work to get that love flowing out of your being, and work untiringly at nourishing that relationship to make it seem like effortless love. I know that so many mothers out there will protest vehemently that this is not true, but this was my experience, and I am choosing to share it.

Though no one said so to me in so many words ( since I was too ashamed to be even having such thoughts, let alone telling them to someone), it was my husband who helped me out during those days. During the first one month, my mother was with me to help me care for the baby, and after that my husband and I were on our own. My husband slowly learned to change the baby’s diapers, pick him up, soothe him, make his milk and so on. During nights, he would often care for the baby and make him his milk without waking me, massage my shoulders and legs for me when I was up at night nursing the baby, and so on.

Of course, those days weren’t all roses and daisies, as we did have quarrels when we were both tired from being sleepless, sick of the crying and so on. We were weather-beaten several times. However, we did sail through those stormy days and into more pleasant climes, where the baby has decided to sleep all night, waking just once or so in a night.

Now that I think of those ‘harrowing’ days, some things that would probably have helped me cope better during that time are: a few solid hours’ sleep, some ‘alone’ time, someone supportive, and some help with the baby. I had the last two, and having the first two as well would have made my life perfect.

And after putting in all this effort, who do you suppose my son prefers between us? Yes – you guessed it – My Husband. I am glad, because I am still guilty for having had such unpleasant thoughts when my son was born, and I kind of feel like I am atoning for my sins by having him more attached to his father than me. And as usual, there is the selfish side of me, which thinks – “I am glad that he prefers my husband. Now I can always leave him with my husband and go do things I keep off, like writing for WMB, and my own blog.” 🙂

*Translation – When will my chance come?

Did you find the support you needed when you first became a mother? Did you share any of my feelings of resentment and hardship or were things easier? What advice would you give to a mother-to-be?

This is an original post to World Moms Blog from our writer and mother to one lovely and soundly sleeping son in Garden City India, Fire Crystals.