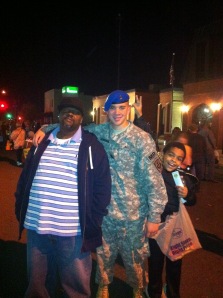 My children are biracial so I dealt with a double-edged sword; not only could I not teach them to be men, but I certainly could not teach them to be strong black men. They deserved much more than I was able to give them, and I will live with regret for some of my decisions for the rest of my life.

Don’t get me wrong, I am not bashing single parenthood because life doesn’t always turn out as we expected. Raising children alone is simply an incredibly hard job, and I can’t believe that anyone chooses to willingly take that long road. My children never said it out loud, but I know that they longed for a male in their life.

There is no emotional pain similar to your son asking why his father isn’t around. What child wants to have to deal with the fact that one of their parents simply walked out of their lives? As much as I said that I didn’t need a man in our family, I was sadly mistaken.

However, as life does, we moved forward from my previous poor choices and thrived in spite of them. In the last four and a half years, I went back to school and am very close to finishing my Bachelors degree. Also, I obtained a well-paying job in Human Resources that provides a stable future for us. But, perhaps, the most important event of all was September 12, 2007 when I met the man who made those years of struggle worth it.

Without sounding like a cliché, after developing a real friendship that turned into love, he has become the savior of our family. His love makes me honestly accept the lies that I previously told about preferring to be single. He supports my dreams, he encourages me, and he is handsome, intelligent and hilariously funny. He works hard to give us the things that we want in life. He is a good father to his own two boys. Best of all, he loves my children and provides the strong black male figure that they have long needed.

And he wants me to be his wife.

After he proposed marriage in front of my family on Christmas Eve, I am still in awe and shock that I will get to spend the rest of my life with him; not only for myself but largely for my children too.

A few months before he proposed, I heard him tell my youngest son that he loved him and was proud of him. Secretly, I cried about that moment because I know how much that must have meant to my son who has no memory of his biological father.

In a few short months, I will celebrate my 39th birthday, and while it took me a long time to find love, it was worth the wait. We plan to marry later this year, and I have every confidence that our marriage may finally heal old wounds in me and the boys. My sincerest hope is that somewhere down the road, my soon to be husband will be the only father to them that ever mattered.

Our family isn’t so little anymore, and it is finally, truly complete.

What is your family dynamic like?  Congrats to Margie on her engagement!!