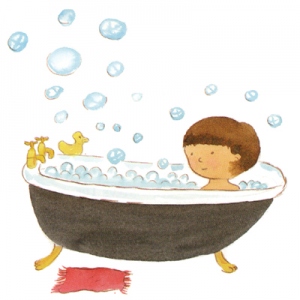 My son is 7 1/2 and has been taking showers on his own for a while now.  Recently, he has been taking baths. The last 3 times, he has completely soaked the bathroom.  The floor was flooded, the counters were wet, and I just couldn’t imagine what he was doing in there.

He’s really into weather and the ocean, so I always say, “No tsunamis in there.” He knows I mean that he can’t make big waves in the tub that cause the water to spill out.

He’s an honest kid, so I believed him when he said he hadn’t been making tsunamis in the tub after the first time I found the bathroom soaked.

After his next bath, it was the same thing.  Water was everywhere.  I started thinking he was just walking around the bathroom when he got out and not drying off.  I thought of this soft ball that he throws in the tub. I figured that maybe he was throwing it out and getting everything wet.  I meant to ask him about it, but I was busy so I dried up the floor and forgot to talk to him.Tonight I finally found out what has been going on in there. He called me in the bathroom because he couldn’t get the shampoo out of the bottle.  When I walked in, he was standing in the tub. I didn’t think too much of it.  Maybe he was just soaping up.  He started talking to me as he was washing his hair. He was still standing.  I wondered why he wasn’t sitting, but I didn’t want to interrupt him when he was talking (interrupting is something we’ve been working on lately). Next, I saw him bend over and stick his head in the water.  He rinsed all the soap out.  Then he flung his hair up into the air, spraying water across the bathroom.  After this, he hung his head down, so the rest of the water dripped into his hands, which he had cupped together.  When his hands filled up, he threw that water into the air.  He did this 3 times in a row. I was holding in my laughter; I couldn’t believe that this is what had been going on in there.

I thought that was the end of the water escapade, but I was wrong.  After the whole hair-flinging and water-tossing, he sort of hopped down into the tub and water splashed out.  He cleaned off the back of his hair, stood up while soaking wet, and shook his whole body like a dog.  Once again, water sprayed all over the bathroom.  He did this a few times, too.

I tried to quietly get my husband because it was so hysterical, but he didn’t get there in time.  I was keeping my laughter in as best as I could,while trying to explain to my husband what had just gone down in the bathroom.

You might be wondering why I didn’t stop it, and what was going  through my head at the time. First off, I finally had an answer to what was going on and I wanted to see it all. I thought it was a hysterical and creative way to wash your hair.  He wasn’t intentionally trying to mess up the bathroom and give me more work.  He just found a way that worked for him, and it was pretty fun.  I don’t think he realized how wet he was making things.

There was another part of me that thought, “Well, I’m glad he’s getting his hair thoroughly cleaned.” Yes, I do plan on talking to him, but I just need to give it a night and enjoy the laughter a little longer.

What’s one of the biggest messes your child has made?  How did you handle it?

This is an original post to World Moms Blog by Maggie Ellison of  South Carolina, USA.