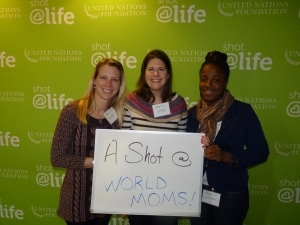 This is part 3 of a three part series on World Mom’s Bloggers Jennifer Burden, Nicole Melancon and Kyla P’an trip to the Shot@Life Summit in Washington DC. at the end of January to attend a summit focusing on the Shot@Life campaign, hosted by the United Nations Foundation. Click on links here to read Part 1 and Part 2 of this series.  Part 3 will focus on what we learned at the summit and some of the amazing Shot@Life Champions that we met. 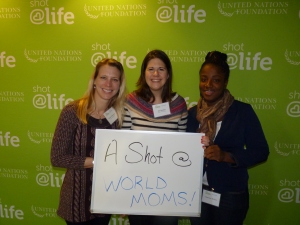 So what happens when you bring together 45 of the nation’s most enthusiastic, energetic Shot@Life Champions?  A huge success filled with ideas, excitement and passion to help save the world’s children from vaccine-preventable deaths.

The Shot@Life Summit was orchestrated by the United Nations Foundation to train, motivate, organize and provide the tools necessary for the Shot@Life Champions to launch the movement this coming April during Global Immunization Week.  The Champions represented all walks of life.

There were moms, bloggers, photographers, doctors, advocates, entrepreneurs, a teenager representing Model UN, and two brave men who represented Rotary International and The Lion’s Club (two organizations that have already done a substantial amount of advocacy and fundraising for vaccines).

To give an example of just a few of the many “champions” we met, Dr. Ari Brown, coauthor of the popular reference book Baby 411, was there representing the American Academy of Pediatrics; END_OF_DOCUMENT_TOKEN_TO_BE_REPLACED

SWITZERLAND: “No Matter How Long the Winter, Spring is Sure to Follow” 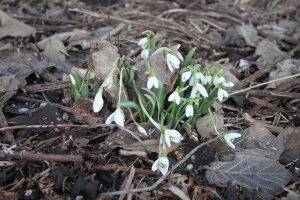 Spring time is taunting us here in Switzerland. When the temperatures crept above freezing last week we slowly came out of hibernation and have gradually been shedding layers of coats, gloves and scarves.

It is still awfully chilly, but our need for fresh air allows us to adjust to the chill of the breeze. We are soaking in the sunshine and looking forward to warmer weather. Don’t get me wrong I enjoy a beautiful snow, and who doesn’t like hot chocolate season?!

But we are all ready for something new. We are ready to get out of this house!!!  END_OF_DOCUMENT_TOKEN_TO_BE_REPLACED