SWITZERLAND: A Turtle, a Twist and a Friendship 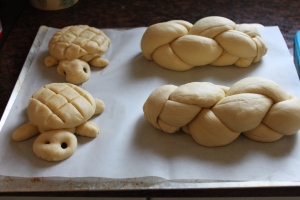 I won’t lie, one of the biggest perks about Switzerland is the fabulous cheese, bread and chocolate. I have the extra pounds to prove that we have indeed enjoyed it! Our kids have no doubt developed a more cultured palate living here.

One of my goals while living here has been to learn to make the traditional “Bern bread” also known as Zopf bread. It is delicious twisted bread that can be enjoyed by tearing off part of the braid or slicing for sandwiches and soups. Any way you eat it, it’s wonderful. When my 2-year-old went on food strikes, zopf was his weakness!

I recently called a Swiss friend and asked if she would be interested in spending an afternoon teaching me how to make the bread. She gladly agreed and we set a date. My 4-year old teetered on a chair and got his hands in every bit of it. We spent the afternoon kneading and sipping tea while the bread rose. We chatted about the weather and eventually our conversation took us to motherhood.

She longs to be a mother and just experienced a miscarriage. I too have walked that road. As we kneaded the bread we talked about losing babies and all of those raw emotions that go along with it.  How it affects a person not only physically and emotionally but it affects friendships and marriage.  My faith in God played a huge part in my healing and it was so nice to offer my friend hope for the future.

When it came time to twist the bread the mood was lightened as we laughed while she tried to explain to me exactly how to twist the bread. She had done it for so many years that it came naturally and teaching a newby like me was just plain funny. Her loaf looked far better than mine, but I am positive they tasted the same!!  She helped my son shape his dough into little turtles with raisin eyes.

When the bread was finally ready to pull out of the oven my eager boys ran to the kitchen begging to bite into their fluffy turtles. My sweet friend said, “Oh no, growing up here I learned that you should never eat bread until it is fully cooled or you will get tummy ache!”

A bit of culture I never knew! I have to wonder how many tummy aches I have had from eating warm bread….although I must admit growing up eating it warm the belly aches were probably worth it.

I think it is such a rich life to be able to learn from friends! We aren’t all going to be the best at everything but I think it’s good for our kids to learn with us from others!

That afternoon I felt I had nothing to share knowing that my friend would be teaching me, but it turns out I was able to share part of my motherhood journey that she had been experiencing in her own life and needed someone to relate to. I went into our afternoon with a goal of learning something new, I thought just bread-baking, but it was an opportunity too to learn about Swiss culture and allow friendship to grow.

If you are interested in trying to make your own loaf of zopf bread here is a great link with a recipe and even step by step pictures of the twisting! 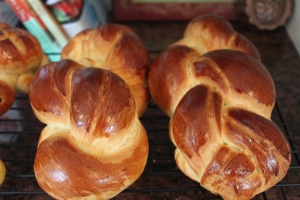 What new skills have you learned from a friend lately? Do you ever get tempted, as a mom, to let your kids feel like you can do everything? What things could you learn from a friend with your kids?

This is an original post to World Moms Blog written by Kristen at Seasons Worth Savoring.