Saturday Sidebar: Is Your Bed a Family Bed? 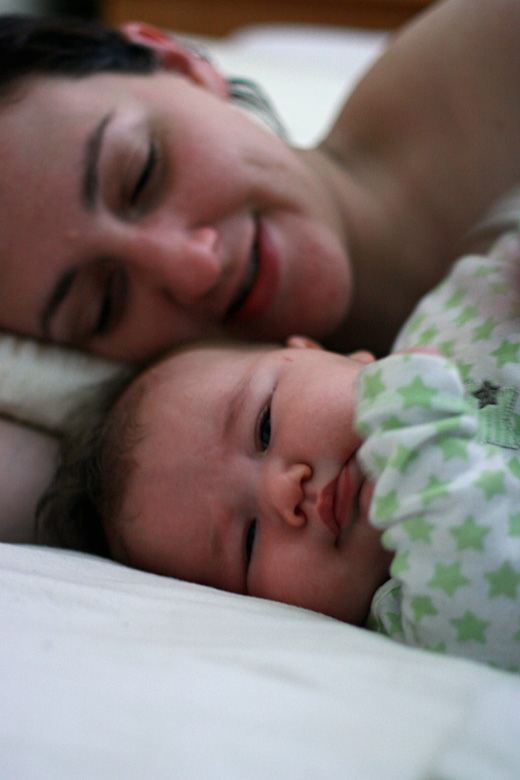 For this week’s Saturday Sidebar, our writers were asked,

Multitasking Mumma of Ontario, Canada writes:
“We co-slept when my daughter was an infant because it was easier for feedings. Now that she’s almost two she starts out in her own bed and comes in during the middle of the night. I don’t mind one bit because I know that time is fleeting and I won’t get these moments back.”

Ms. V of South Korea writes:
“We co-slept from the beginning. From birth to 8 weeks he was in our bed between us. At 8 weeks we transitioned him into a bassinet next to our bed. Once he started going to bed consistently between 6:30pm and 7pm, which was at about 16 weeks, we started putting him down in his own room so that we would still be able to get in and out of our bedroom without risking waking him. Then when we would go to bed, we’d bring him in with us.

At about 5 ½  months, we tried putting him back down in his own bed after he woke up for his first night feeding, and he did just fine, but I was a wreck! I love co-sleeping because I can hear him and respond quickly. When he’s in another room, even with the monitor, I find I am more restless and end up checking on him more often than I would if we were co-sleeping. Recently (he’s 8 months now) we’ve been putting him down in his own room for the night. When he wakes up for nighttime feedings, I feed him, and put him back in his own bed, until he wakes up for his dawn feeding, at which point I feed him and he snuggles in bed with us until we wake up around 7. I also cherish these moments. They grow so fast and it won’t be long before the idea of sleeping in our bed will lose all appeal. Needless to say, I’m a big fan of co-sleeping. For our family it has worked great.”

Mamma Simona of South Africa writes:
“My first was born in summer. He slept in a bassinet next to our bed for the first 3 months. Then he was in a cot in our room until he was a year old. He was moved to his own room after that. My daughter was born in winter and she slept in my bed for as long as I was still breastfeeding at night. I highly recommend it! Neither she nor the rest of the family lost any sleep as I’d latch her on at her first niggle and change breasts at the next niggle!  I don’t know if its temperament or due to the co-sleeping (or a combination of both) but my daughter has always been way more secure, outgoing and self-confident than my son. My kids are both teens now and I do miss those special “cuddle times” when the rest of the world was asleep!”

Dee Harlow of Virginia, USA writes:
“We have never co-slept with our 2yo twins from the start. They had their own rooms and they have always been great sleepers, staying on schedule even throughout changes from three naps a day, down to two and now one. They even stayed on schedule during house moves and frequent travel. They’ve always napped at the same time and slept at the same time each night. We are truly blessed in the sleep department with 12+ hours at night and a solid nap. I know that I’ve missed out not snuggling with them through the night – a motherhood experience I’ll never have now and it was difficult when I was breastfeeding, but my husband and I are eternally grateful to not have sleep issues, especially with two. We also never used monitors, which I believe made it easier for us to give our children the chance to self sooth.”

Asta Burrows of Norway writes:
“My wee lad slept in his own bed from the beginning. First in our room (to make it easier for me to feed him at night), but once he started sleeping through the night at 4 months old he went straight in to his own room.”

Jennifer Burden of New Jersey, USA writes:
“I’ve read so much about the benefits of co-sleeping. I just couldn’t sleep with the baby in the bed, and either could my husband. It didn’t go very well! As my first daughter got older, and we had periods of her climbing into our bed when she was sick, our sleep really struggled. So, when she was back to healthy, we wound up keeping the kids in their own beds, so we could be better, well-rested parents.

My hope is that when my younger one (just about to turn 1!) is older, that the two girls can share a bed, if they’d like to. If my older daughter had her way, they’d be sharing a bed now! I think sharing a bed will be fun for them. And, hopefully they can sleep!!”

MamaMzunga of Kenya writes:
“Oh I so badly wanted to co-sleep with my first. I loved the idea of being so close and of course not having to get out of the bed to nurse. Like a lot of you, I also read a lot about the benefits and how it’s really anomolous gloabally to sleep in different rooms.

All that said (best laid plans…), I am a very light sleeper prone to insomnia and Caleb was an incredibly noisy sleeper. So, it was a bit of a disaster and we abandoned the effort after only about a month.

With this one co-sleeping has been much better (but it’s only day 9!). I’m calmer and I’m using ear plug so that I miss the random cooing but become awake when he really needs me.

Related: I do feel self-conscious here with the idea of putting a baby in another room since my Kenyan friends and colleagues think it’s strange and maybe even cruel (same for “letting the baby cry it out”). Does anyone feel the same way?”

Kyla P’an of Massachusetts, USA writes:
“I never co-slept with our first child but she did live in a bassinet, then Pack ‘n Play, beside us for the first 5 months of her life. With our second, who is a much more clingy child, we did the same until 6 months, then moved him into a room with his sister where they’ve co-slept (in separate beds) for 2.5 years.

I have many friends who suffer through restless nights in beds too small to accommodate an entire family. I am really happy neither of our kids have ever gotten into bed with us at night though I do wish they’d sleep together once in a while as I also have several friends with same gender kids, who end up sharing beds every night and I think it’s incredibly tender. I wonder why mine never do.”

Hamakkomommy of Japan writes:
“Co-sleeping is the norm here in Japan and doing otherwise is viewed as cruel. We have two large futons in our bedroom. My daughter always sleeps with me; my son varies between sleeping with me or with dad.

Most parents wait until their children decide they are ready for their own room. Most kids under ten sleep in a room with their mom, though often dad sleeps in a different room. His sleep is viewed as being more important.

In a disaster prone country, moms want their children close at night. Plus there is no central heating, so more people under the blankies equals a warmer winter night for everyone.”

What about you…have you ever co-slept with your child(ren)?