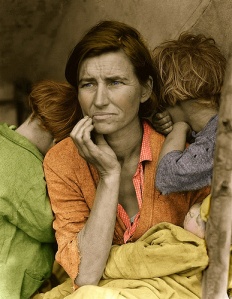 “Sometimes, reaching out and taking someone’s hand is the beginning of a journey. At other times, it is allowing another to take yours.” ~Vera Nazarian

One of the most misunderstood parts of motherhood is the emotional roller-coaster you’re on right after giving birth. Everyone expects you to be settling in blissfully while staring doe-eyed at your bundle of joy.

But having a baby is both amazingly fantastic and ridiculously exhausting.

Whether you’re a first time mom or not, the disruption while everyone adjusts to the new normal can be overwhelming. You may be fortunate enough to have a wonderful mom (or a well-meaning mother in law) to step in and help but relinquishing a degree of your control over the day-to-day can contribute to frustration too. And if you’re like many women, the combination of these factors may lead to a case of “baby blues”, or to full blown post partum depression [PPD].

These negative emotions can be confusing for both the mom and those around her as well. Many women think there must me something wrong with them, assuming they “should” feel happy. More often than not, feelings of guilt, shame, and the need to put up a facade prevent women from reaching out to tell anyone how they really feel.

I can attest to the fact that it’s very isolating to be ashamed of your emotions, and have them not make sense to you. It’s hard to imagine anyone would understand.

When your symptoms of depression and being overwhelmed include long episodes of crying, it’s more obvious to people that you’re dealing with depression. But what if that’s not your experience? What if it’s hypersensitivity and irritability (or even rage), triggered by really minor stuff, instead of tears? What if, rather than feeling a lack of emotion toward your baby—like the books say often happens with PPD—you experience feelings of distance from your spouse and your other children?

My experience with post partum depression looked very much like what I just described. I felt guilty for my lack of emotion toward the rest of my family and ashamed that I couldn’t consistently keep up with the house and food and laundry and still parent my kids. My irritability and rage made my husband withdraw and I felt incredibly alone, overwhelmed and confused, unable to confide in anyone.

I went undiagnosed with PPD for several years. Eventually, I became aware of my behavior as a mother and out of shame, and a sense of duty to my children, I reached out for help.

My family doctor prescribed an antidepressant. But it didn’t help me understand my particular experience with PPD or gain any sense that it was a common occurrence.

Upon joining Twitter, I came across a community of women who used the hashtag #ppdchat in their tweets to one another. During a weekly scheduled Twitter chat using the hashtag #ppdchat, I asked if my “strange” symptoms of rage, irritability, and distance from my family were valid PPD symptoms.

You can’t imagine the relief that swept over me that day as I learned that my feelings were typical. I felt an incredible sense of community with the women I was talking to on Twitter. Having never spoken out loud some of the darkest things I had thought or felt because I didn’t think people would understand, I was suddenly surrounded with validation and support.

Since that day, I’ve been a very active member of the weekly Twitter #ppdchat. Between those weekly chats, the women who participate in the chats are encouraged to call out for help by adding #ppdchat to their tweet if they need to talk to someone who understands.

I’ve spent time responding and conversing with moms who reach out with a need to connect to someone and I have also been that mom, who has reached out to the community that way. Women discuss their anxieties, feeling overwhelmed by unexplained sorrow, ask for suggestions to help cope with a co-worker or family member, who doesn’t understand and who invalidates their emotional struggles, and open up in very brave and vulnerable ways.

Surviving and healing from the effects of post partum depression is an ongoing journey.

You never really forget the darkest moments you experience, and it gives you such compassion for others walking that road. The self awareness and healing that community can bring is priceless and it begins by feeling safe, and risking trust, and reaching out.

Did you struggle with post partum depression, or have you been close to someone who experienced it?

This is an original post to World Moms Blog from our recently-divorced, highly-resourceful, single-mom of four, Frelle, in North Carolina.

The image used in this post is credited to Don Hankins. It has a Flickr Creative Commons attribution license.