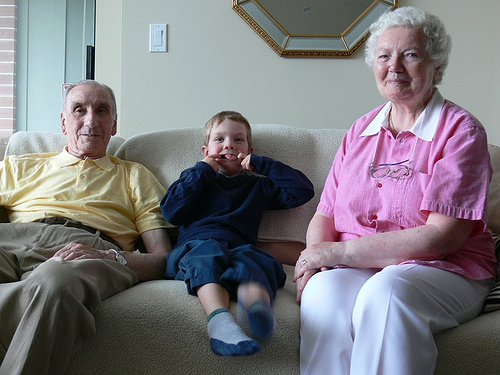 I remember that on Saturdays, when I would be allowed to watch a bit of children’s telly, I would walk across the little yard, knock on my grandparents door (which was usually wide open) and ask nicely if I may be allowed to watch that half hour of telly.

I remember sitting there very quietly. (I wouldn’t want to be a nuisance.) I honestly don’t know why I felt that way. Looking back, I don’t think it was my grandparents that encouraged this behavior (not too much anyway). Sure, they expected children to behave, but they were also very loving. I was just far too shy to realise it.

I am still shy and have always been, but I am better at handling it now. I am very aware that I would like my son to grow up differently. I know I can’t turn him into the perfect person, but I can at least help him on the way.

He may turn out to be shy, as he is quite careful at the moment. But either way, I, at least, want him to feel perfectly at ease with his grandparents — that is one thing that I can help with.

We live quite close to my parents (half an hour away – so not too close!), and they love to spend time with the wee lad (who is now 19 months!). He lights up when he sees them, and when we are all together he will go up to his grandmother and ask to be picked up (well, he stretches him arms in the air and says “eh”…so we know what he means) rather than coming to me or his father. I guess it depends on what he wants, he already knows that his grandmother is more likely to give in than I am…

My husband’s parents live in another country, so naturally the wee lad doesn’t have the same relationship with them, yet.

As he gets older, he remembers things and people for longer and hopefully he doesn’t have to start from scratch every time he sees them. Although using Skype is helping, the wee lad is now old enough to manage to sit in front of the computer for a few minutes at a time before getting bored, and he likes to wave to granny, and loves it when she sings to him!

The other day his uncle in California sang “Twinkle, Twinkle Little Star” to him using Facetime. We put our iPad in the wee lad’s bed, and, to him, it seemed like the most natural thing in the world. To me, it seemed so “sci-fi”, but what a great way to keep in touch with family/friends that you don’t see very often!

Knowing that he has grown ups in his life (other his father and I) that he feels 100% safe with and who will love, spoil and help shape him makes me feel so comforted. He is not the type of child who is happy to be picked up by everybody (he hasn’t been since he was a few months old), which, in a way, makes it even nicer when he is brave and approaches a grandparent to get attention.

Do you have grandparents or other adults in your life that can spoil your children? If they are not nearby, how do you overcome the distance?

Photo credit to gordasm. This photo has a creative commons no derivatives license.