UNITED KINGDOM: Window on Another World 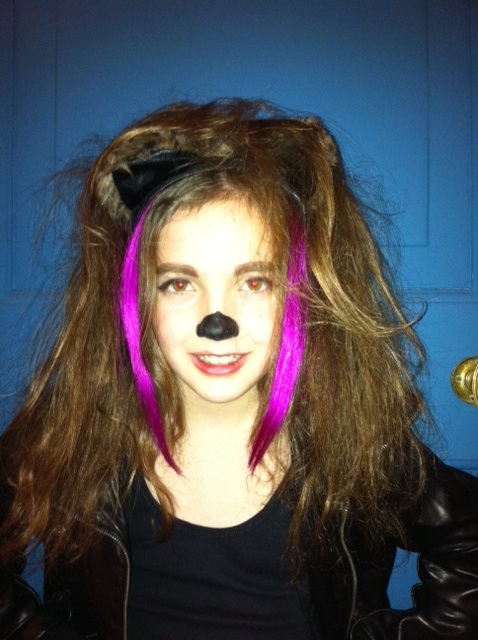 There’s one day every year to which Grace counts down with unparalleled shiny-eyed fervour. It’s not Christmas, or her birthday, or the start of the summer holidays, though of course all of these are also proceeded by repeated questioning, date-checking and suppressed thrills.

Her anticipation of this year’s event started precisely one day after last year’s event. On that day Grace drifted dreamily past me, trailing her fingers along the furniture, her mind turning on internal images of the night before. I asked her if she was alright: she barely heard me.

When I went upstairs later to monitor her progress towards bed, I found her at the sink in the bathroom, gazing into the mirror at herself, her tortoiseshell eyes lit with the amber light of her imaginings. As I entered the room she turned to me and said, as though continuing a conversation started much earlier: “… so then, Mummy, next year I can be – .”

Halloween is the night when Grace can just be.

She is able to step into the characters she draws with such skill and wit; into the pictures she summons inside her head to fortify herself daily. She can be the other person she conceals so fretfully and often unsuccessfully, existing as if behind a torn veil for the rest of the year. Halloween is when, as her favourite character of the moment puts it: freaky is cool. Grace’s otherness can rule.

While other children give flight to their fantasies on October 31, Grace simply steps forward from the wings where she has been waiting, waiting, waiting. She basks in the spotlight and adores the attention, but even as she laps it up, the praise for her creative presentation puzzles her (though lately I think she begins to understand the misunderstanding, and there is a trace of condescension in her gracious acknowledgements), she is not putting on a character.

She is her characters. She sings, she snarls, she pirouettes, twists and strikes impish poses. She is otherworldly and on this one day a year the freedom to exist beyond the constraints of our bland, neuro-normal world brings her a joy that observers can only imagine.

A few months ago I walked down the local high street with Grace. Rather, I walked down the high street behind Grace, who skipped and hopped ahead of me, moving to a tune inside her head. As I watched my daughter dance gracefully and entirely unselfconsciously down the road I felt for a moment as though a window had opened and I could almost hear the melody quicken; the notes swoop; the strings build to a crescendo.The moment was broken by the sound of slow, sardonic handclaps.

A man in a shop entrance yelled after her and cocked his head at me: “Nice moves she’s got there, eh?”

Grace stopped as abruptly as a puppet whose strings have been cut. She rushed up to me and clutched my coat, tucked herself in under my arm for cover. “Why is he laughing at me?” she hissed embarrassedly up at me. “Why?”

I shushed her and clucked and gestured surreptitiously at the man and said: “Because he’s rude and he’s got no imagination.”

Inside, I was remembering the very first Halloween when Grace dressed up. She was two and a half and we were living in Washington, in a picket-fenced suburb which was transformed that night by flickering pumpkins and candles and strings of fake cobwebs festooning the plentiful trees and bushes that lined the avenues.

That year she had fallen for the Little Mermaid. (We did not yet know that it was the first of a series of single-minded obsessions, nor what that would signify.) To delight her, I ordered a mermaid costume from an online party store. When it arrived it was more Rita Heyworth than Ariel, but no matter, she donned the sequinned, fishtailed frock and the bright red bouffant wig and with an expression of ecstasy immediately launched into a word-perfect rendition of her favourite song from the Disney movie.

Her father has lovingly stored the video film we have of her from that night, but I can remember every moment of her performance. She recited every single word, despite not understanding many of them (and having to pause now and again to spit out tendrils of her voluminous wig, to muffled parental giggles off camera.)

She was gorgeous through but the final moments of the song have a bittersweet resonance as they play out in my mind. She sings: “When’s it my turn? Wouldn’t I love, love to explore that world up above? Out of the sea, wish I could be, part of that world.”

This is an original post to World Moms Blog by Sophie of the United Kingdom, who has a daughter with special needs.  Sophie can be found on her blog, Grace Under Pressure, or on Twitter @SophieRunning.

Photo credit of Grace to the author.